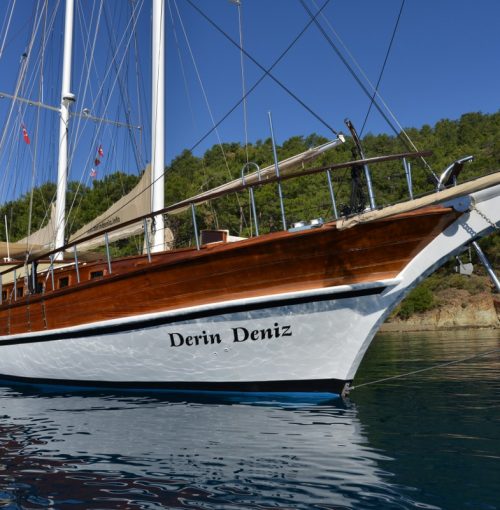 THE YACHT
The Wood Gulet Yacht Welcome to our crewed yacht, this 27 meters (88.5 feet) 5 stars floating palace to sail in comfort with 12 passengers along the Turkish Mediterranean and Aegean coast. The Wood Gulet offers 6 air-conditioned quarters: 2 masters, 2 double and 2 twins, with independent sophisticated shower facilities and a high standard of comfort. Our company offers the flexibility of combining a top quality cruise in Turkey, a holiday in movement on board a crewed Gulet with the luxury and comfort of a five star hotel vacation.

On board Service Our Masterchef will cook you delicious meals with a variety of Mezes, fresh Seafood, Meats, Borek, Kebab and much more, confirming that Turkish cuisine is the fruit of a cultural heritage of good cooking using the freshest of ingredients.

The Top Deck – Sun Desk Relax tanning and enjoying the landscapes on of the two spacious sun decks offering eight sun beds and a large outdoor lounge area. The most breath-taking sea and landscapes will ravish your eyes. On board Features Deck and cabin layout: The wood Gulet yacht is designed to host 12 passengers, it comprises 6 air-conditioned cabins: 2 Masters, 2 Double, 2 Twins, 1 Captain quarter. Modern equipment using the latest technologies assures the best possible on board safety. The crewed boat we offer for rent is a happy combination of the long Turkish tradition of professional boating and the modern requirements of sophisticated people who want to enjoy a personalised luxury holiday away from the hassle of contemporary life. 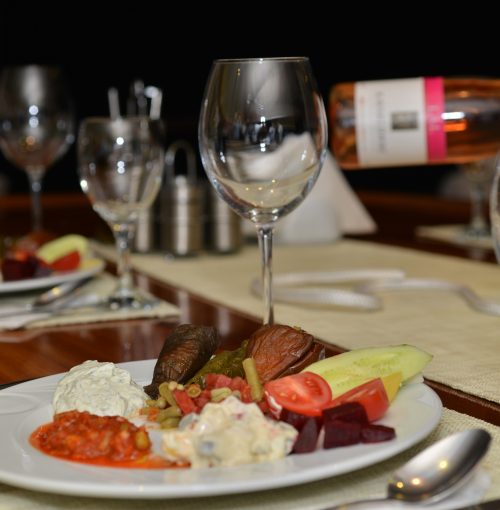 SERVICE & CREW
On a yacht, the crew and the service is as important as the quality of the yacht; or even more. We provide you the 5 star hotel comfort in a luxurious boat with our 50 years hospitality experience.  Derin Deniz is an old family company and now, they sail as father and son. Treating guests is a family tradition for them and they do this with first day excitement. They do their best to make your cruising memorable. Both of them can speak English and German. Captain Ahmet  will give you the  information for the local history and surroundings, advise the best places to anchor for swimming, snorkeling and visiting. Together with his crew members, provides a relaxed atmosphere but at the same time extremely professional familiar with the coastal waters of Turkey and the yacht's inside out. The talented Chef Barıs is proffesional on Turkish Cousine. He cooks delicious meals with a variety of Mezes, fresh Seafood, Meats, Borek, Kebab and desserts. You dont need to go to souvenir shop you allready will have 1-2 delicious unforgetable kilos. Unless you dont have a special diet. 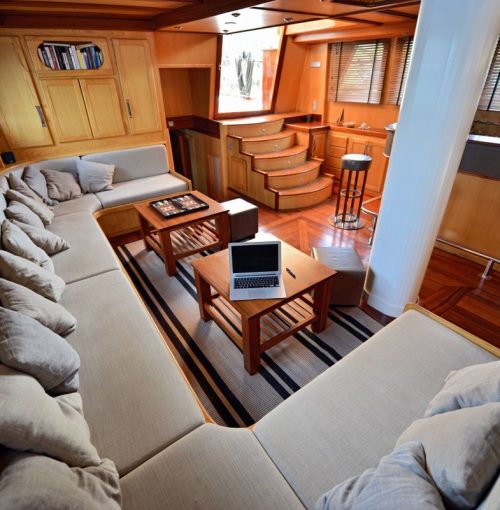 INTERIORS
Rear Master Cabin Located aft of the Wood Gulet, these luxury quarters with a king size bed and well-equipped private bathroom will offer dream holidays and the best possible rest to our privileged guests. Front Cabin Located at the front of the yacht, this luxurious cabin with its king size bed will satify all your fantasies at sea. Double Cabin These two luxurious quarters are located at the aft of the Gulet. Twin Cabin These two luxurious quarters are located at the front of the Gulet. Sanitary Your personal comfort will be our constant preoccupation during your stay on board thanks to luxury sanitary facilities. Each cabin has its own shower and toilets offering comfort and privacy throughout the cruise. We care to offer you the comfort of home together with the novelty of a new surrounding on a yacht cruising along the Mediterranean coast of Turkey.

Winner of the Gourmet Yacht Competition!!